Last night, when Frances McDormand accepted her Oscar, she brought a new phrase to our workplace equality lexicon — calling on the industry to adopt “Inclusion Riders.” Based on an idea from the Annenberg Inclusion Initiative, an Inclusion Rider sets goals for hiring more members of underrepresented groups on film productions. As Dr. Stacy Smith explained in a 2014 article, an inclusion rider is a benchmark for tertiary speaking roles, and should reflect the gender representation of the film setting.

So will this work?  This is a structural design level diversity & inclusion reform – and that’s good!  That’s the kind of approach we know is more likely to succeed. BUT, without guardrails it can become a meaningless check the box exercise.

Good (and stated) intentions do little to move the needle on workplace #inclusion.  We need  what Iris Bohnet calls “equality by design” and what we call structural reform.

A structural reform or a design-level intervention means changing the process at the front end to address the biases and institutional barriers that reinforcing existing problems in order to remove barriers and disrupt biases. It means structuring decisions and aligning incentives so your standard operating procedure produces more of the outcomes you want – like improved diversity, equity, and inclusion. As Frank Dobbin & Sandra Kalev and others explain, structure and design matters – especially transparency, accountability, & measurement.

A classic example of a structural, design-level intervention is the NFL’s Rooney Rule. Cyrus and the late Johnnie L. Cochran, Jr. issued a statistical report in 2002 showing that for Black coaches, “superior performance” translated to “inferior opportunities.” Under the leadership of the late Pittsburgh Steelers owner, the NFL adopted the requirement that at least one minority candidate be interviewed for each head coach or general manager vacancy.  This resulted in a record number of minority head coaches and general managers.  Showing the power of diversity, 10 Super Bowl teams over the last decade have been led by a minority head coach or general manager including among others Coaches Tony Dungy,  Mike Tomlin and Ron Rivera.

The story of the Rooney Rule has important lessons in thinking about Inclusion Riders. In the face of existing barriers keeping talented African-American and other minority coaching candidates from being hired as head coaches, the league agreed to a simple but powerful new step in its standard operating procedure. This simple reform led to dramatic improvements, and has now been increasingly adopted by corporate America. Notably, Smith includes a Rooney Rule style requirement as an additional key gender equity  complement to inclusion riders.

Similarly, inclusion riders could be a meaningful, structural, design-based reform that requires action. They set a SMART goal – Specific, Measureable, Attainable, Relevant and Time-Based.  But there are a few key elements that could determine whether inclusion riders have as big an impact on Hollywood as the Rooney Rule did on the NFL.

First, as Smith and the Annenberg Center make clear, the discussion can’t be limited to gender representation. It must include goals based on race and ethnicity, and LGBT and disability inclusion, and should incorporate intersectional perspectives. Metrics besides representation — like pay equity and workplace harassment — are also important markers of inclusion.

Second, we believe, based on our own work, that reforms must go beyond the cast to include the crew. In 2017, Working IDEAL performed a gender pay equity study for a California union local representing some female dominated crafts working on film, television and commercial production crews. In the process we learned that film crews overall are highly gender segregated. The hiring process is often based on word of mouth and existing networks, making it hard for outsiders to break in. The kinds of jobs that are more open to women are likely to be lower paid with fewer protections. Sexual harassment is also a significant problem for women on film and television crews.  While a lot of attention has been paid to the barriers to women getting certain key jobs like director, creating inclusion goals and reforms to address crew positions across the board is also critical.

Third, inclusion riders must incorporate an accountability mechanism. How do you enforce and make sure qualifiers like “representation that reflects the film setting” don’t end up becoming work arounds?  How do you ensure equal opportunities for jobs on film crews across departments, instead of meeting targets by channeling underrepresented folks into lower paid or shorter-term positions?

One immediate option is full transparency.  Every Inclusion Rider should include contract language providing a public reporting mechanism, that kicks in at multiple steps in the process These reports will create pressure but also reward those who do the real work, can follow through and show results.

Over the long term we need more capacity building. Unions, studios, and production companies should be working together on aggressive recruitment, outreach and training plans. They should also be reporting their results. Together they could also develop benchmarks based on the available pool of talent that could bolster the Inclusion Rider targets.

One of the most effective moments last night was when Tiffany Haddish and Maya Rudolph provided a hilarious but pointed caution: making a better effort to recognize and reward Black talent didn’t mean #OscarsSoWhite was no longer a problem. These are deep challenges that won’t be easy to solve. But “inclusion by design” is a good place to start. 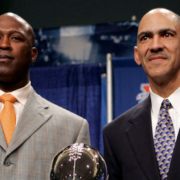 How the Rooney Rule Can Advance Equal Opportunity
Decades of Well-Meaning Responses to Sexual Harassment Have Failed. Can We...The UK Gender Gap Reporting Calls Into Question Those Big Companies With Perfect...
Scroll to top